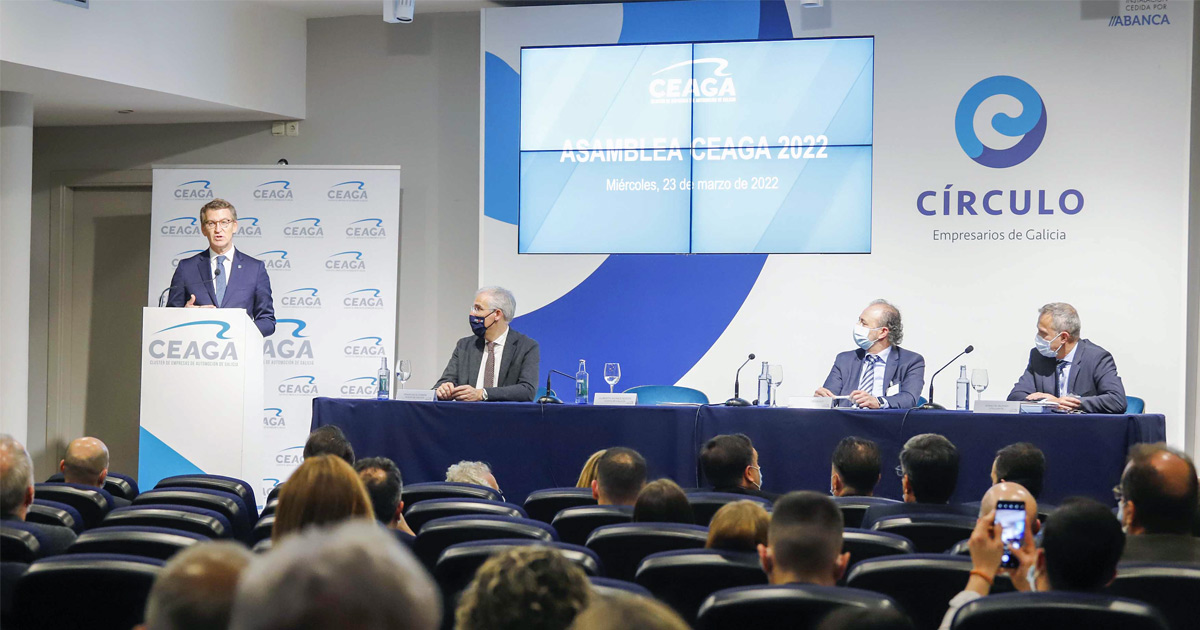 On March 23rd we returned to the Círculo de Empresarios de Galicia, this time to attend the CEAGA Annual Assembly. The meeting was attended by more than 150 managers who were able to learn about the situation of the automotive sector and its new challenges for this year. Our InprOTech team was represented by Ibán Morillo, Iago Fortes and Ricardo Veiga.

The assembly reviewed the closing of the 2021 financial year, and undoubtedly showed the capacity of the Galician automotive sector to adapt to the circumstances. CEAGA beat its record turnover, which amounted to €11.2 billion (7.3% more than last year). At the same time, the export record was also broken, with 8,160 million € (12.4% more than last year); this figure represents 32.3% of Galicia’s total exports. With regard to foreign sales of components, they amounted to a value of 1,650 million € to countries such as France, Germany, Portugal, Poland, Argentina, Morocco, Slovenia and the USA. On a negative note, 1,530 jobs were lost, representing 6.1% fewer total employees than last year.

On the other hand, we were particularly pleased that the Business Factory Auto project was highlighted, from which Inprosec Auto, now InprOTech, was born in 2017, in the second edition and which in December started its 6th edition with more than 20 new innovative projects.

Afterwards, the challenges and objectives of CEAGA for the year 2022 were reviewed. Roberto Cavallo, president of CEAGA, pointed out that “unfortunately, this year we are facing a greater number of uncertainties and problems that are seriously affecting our sector. This year we have to add the problems experienced due to the shortage of semiconductors, the invasion of Ukraine, with the consequent rise in fuel prices, and the recent strike in the transport sector. All these circumstances are causing a very complicated situation for our industry with supply problems and sharp rises in costs“.

The president of the association also wanted to emphasize that: “from CEAGA we are committed to continue accompanying our companies and doing what we do best: promoting high-impact cooperative projects to improve the competitiveness of companies in the Galician Automotive Sector.”

Finally, we would like to comment that for us it is a pleasure to attend this Assembly where we were able to learn about the evolution of the Galician automotive sector and chat with some of our customers, especially those with whom we collaborate in CEAGA’s SANTI project.